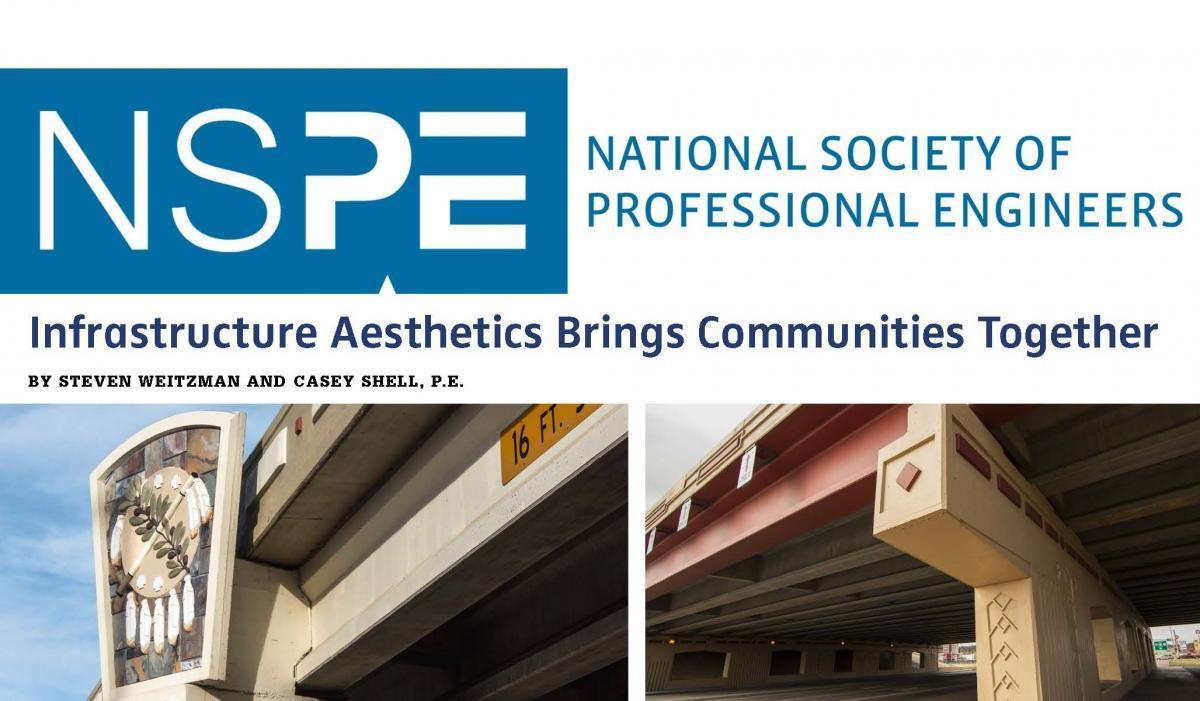 Increasingly since the late 1970s, when the nation worked to revitalize after economic recession, transportation projects have incorporated aesthetic elements. However, infrastructure improvements were generally superficial, added as afterthoughts, and they often clashed with preexisting architecture. It would take another 30 years for design consultants to develop best practices. Transportation infrastructure is about much more than ingress and egress. The bridges and highways that connect people are also opportunities to tell their stories though imagery and patterns. When residents come together to discuss designs, they create and assert a shared identity as the people of a town, city, or state.

Over the past 20 years, Creative Design Resolutions Inc. has partnered with more than a quarter of US departments of 5 transportation on aesthetic design. The company has designed bridges; multi-mile corridor plans; and larger multi-modal interchange projects. Done early in the process, aesthetic designs can be developed alongside engineers of record, is allowing for the complete integration of engineering and aesthetics. Most infrastructure projects are cast in concrete. A mold, called a form liner, fits into the form and is filled with concrete to create the aesthetic and structural elements of a highway or bridge project. When the form and form liner are stripped off, their design is permanently impressed into the surface of the concrete.

CDR begins its aesthetic design in conversation with clients, stakeholders, and residents. Exploring local history and culture, agriculture and commerce, and flora and fauna provides inspiration for meaningful design. As the Oklahoma Department of Transportation began rebuilding infrastructure and replacing bridges, the department wanted to focus not only on functionality but also aesthetics. ODOT aimed to leave visitors with an impression and make citizens proud of their transportation system. The department engaged CDR as a design consultant after a previous sound wall project received negative feedback from local residents. The aesthetic design concepts had been initiated by ODOT and the artist without stakeholder input. Getting their involvement likely would have resulted in a design that better reflected local culture and symbolism, and that ·achieved more buy-in.

In contrast, in 2009 ODOT, CDR, the City of Catoosa, the City of Oklahoma, and the Cherokee Indian Nation worked together on a bridge project in Catoosa. The stakeholders’ meeting included members of several Native American tribes, city officials, casino representatives, business owners, and community members. It was challenging to bring all these individuals together to review concepts and reach a decision that met everyone’s needs and desires. However, CDR’s mediation and stakeholder compromise led the various parties to agreement on a single design that ODOT could afford. Oklahoma’s strong connection to the Chickasaw and other local Indian nations are also manifest in CDR-designed representations of the Osage peace shield on the Winstar Boulevard Bridge, the Broadway Extension at the Memorial Road Interchange, and the Heritage Bridge. The modularity of form liners allows them to be mixed and matched across projects to make numerous unique patterns. Each time they’re reused, their overall cost decreases.

ODOT has used some form liners up to 10 times. However, what is most important is the unbelievably positive response from communities to the aesthetic designs now systematically incorporated into state projects. ODOT has received a good deal of positive feedback to the aesthetic details on the state’s bridges and roadways. Even more telling is the willingness from communities to participate, both in concept and in funding, on the aesthetic details in their projects because they don’t want to be left out. They like what they are seeing in the other communities with aesthetically pleasing projects. These aesthetic elements are now seen as an important, if not essential, part of the culture in Oklahoma.

Steven Weitzman is president & CEO of Creative Design Resolutions Inc., in Brentwood, Maryland. Casey Shell, P.E., is chief engineer and former director of operations for the Oklahoma Department of Transportation.