‘Mayor for Life’ Barry to be Memorialized in Bronze 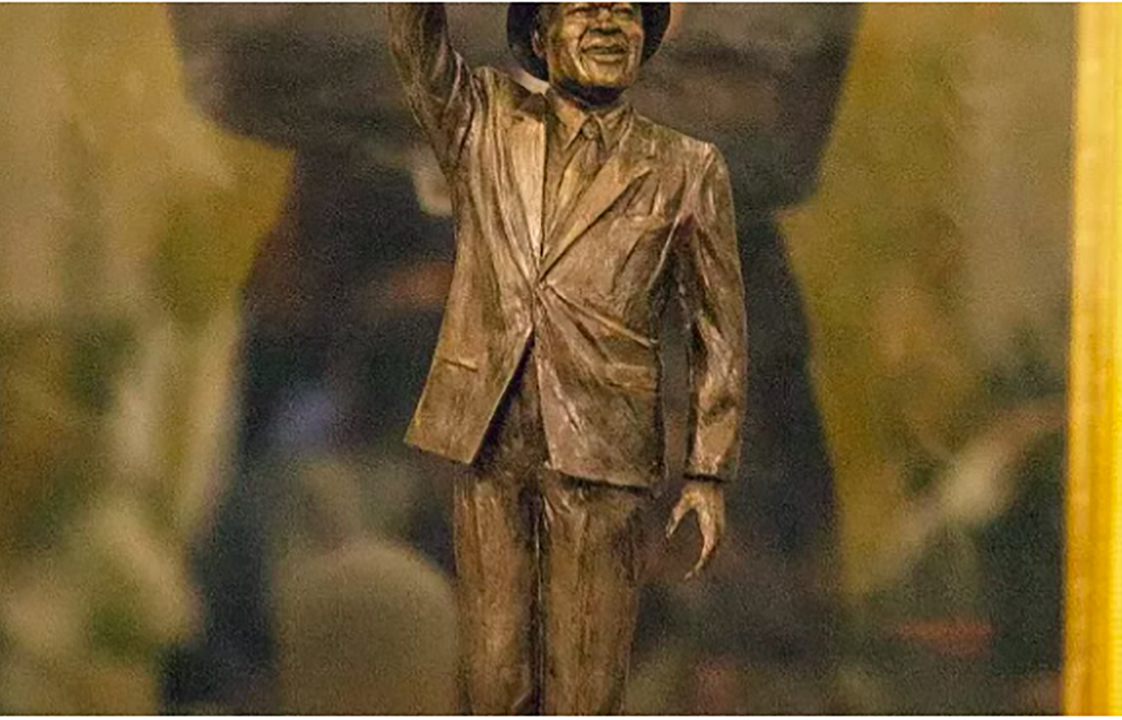 ‘Mayor for Life’ Barry to be Memorialized in Bronze

Plans to memorialize Marion Barry Jr. began soon after he died at the age of 78 in November 2014. More than three years later, the “Mayor for Life” will rise again in the form of an eight-foot bronze statue to be placed outside of John A. Wilson Building.

The statue will be stand as one of few African-American relics on Pennsylvania Avenue, and the politician who once championed for the “least and the left out” will rest at the center of District government.

“The only presence of African Americans that I know on Pennsylvania Avenue is the Dorothy A. Heights NCNW headquarters. Now city hall and Marion Barry will be there,” said Barry’s widow Cora Masters Barry of the her late husband’s presence on what she calls “America’s Main Street.”

The Executive Office of the Mayor, the D.C. Commission on the Arts and Humanities and the Marion Barry Commission partnered to commissioned Maryland-based Steven Weitzman of Weitzman Studios to create the statue honoring Barry.

Barry was the longest-serving mayor in the District’s history. He served as the city’s second home rule mayor from 1979 to 1991, then took a brief break from politics to deal with personal issues before returning to serve another term as the city’s fourth mayor from 1995 to 1999 in a remarkable political comeback.

Barry also served 16 years on the City Council as the Ward 8 representative from his early political years from 1974 to 1978, and then again from 2005 until his death.

Cora said Barry helped transform the District from a Southern town to a thriving metropolis.
He provided incentives for businesses to invest in the city and shared contracting opportunities with minority businesses to expand the city’s Black middle class, and gave jobs to a generation of youth in the District with his summer youth employment program.

“Marion Barry did so much for so many people in this city,” said longtime Barry supporter Rev. Willie Wilson, who leads Anacostia’s Union Temple Baptist Church. “There are many people who are middle class today who live in outlying areas, who no longer live in the District, that got their foundations from their initial jobs under Marion Barry.”

Wilson said the most inspiring part of Barry’s story was his rise to political dominance despite “humble beginnings.”

Barry was born March 6, 1936, in the Mississippi delta to sharecropping parents, and raised in Memphis, Tenn. after the death of his father.

While an undergraduate at what is now LeMoyne-Owen College, Barry became involved in the civil rights movement and later left his graduate studies to continue his civil rights work.

In 1960, he became the first national chairman of the Student Non-Violent Coordinating Committee, an organization that sent young people to the South to register Black voters and was also known for being militant.

Barry’s civil rights bought him to D.C., where he rose to political prominence becoming involved in local issues and leading efforts that supported the city’s struggle for home rule, beginning as a Board of Education member and then as a member the District’s first home-rule Council in 1974.

“How many people have heard the expression, ‘I got my first job to Mayor Barry’?” said former mayor and current Council member Vincent C. Gray (D-Ward 7). “[Barry] put his all, his heart and soul into working to make the District of Columbia a great place to be. He’s a brilliant man who always had these rich ideas, and it was always a delight to be around him and to witness his brilliance and his commitment to having a great city.

“I hope there will be thousands who show up for the dedication in front of the Wilson Building,” Gray said. “I’ve seen the finished product, and it’s awesome.”

The monument will be installed outside the John A. Wilson Building on Saturday, March 3 at 11:30 a.m. with a dedication by Mayor Muriel Bowser and Council Chairman Phil Mendelson.
Guests are encouraged to wear green, Barry’s campaign color, to the unveiling.

“He thought [green] was for life, rejuvenation and hope,” Masters Barry said.