After DC chose a white artist for Marion Barry’s statue, an unlikely friendship was forged 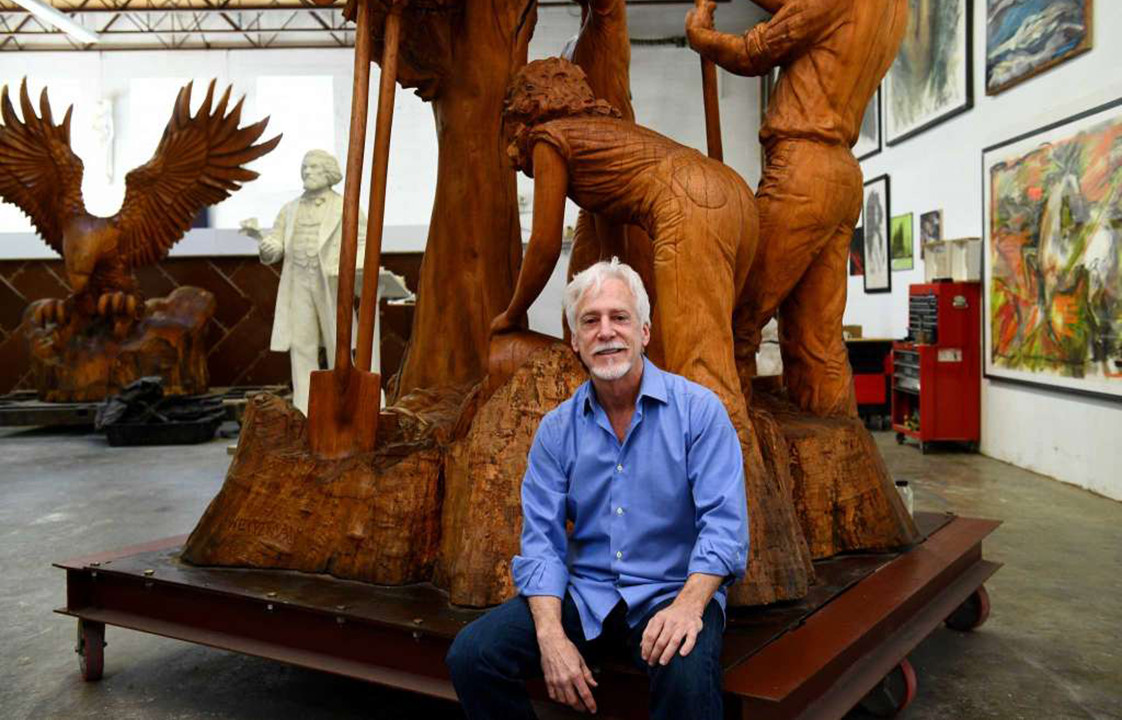 After DC chose a white artist for Marion Barry’s statue, an unlikely friendship was forged

WASHINGTON – When Cora Masters Barry met Steven Weitzman in 2016, she knew only two things about him. She knew that he was the artist selected by the city to create a bronze sculpture of her late husband, four-time Washington, D.C., mayor Marion Barry.

And she knew that he was white.

Barry admired Weitzman’s model for the statue – “It was better than the others,” she says – but she was deeply troubled that an African-American sculptor hadn’t been given this opportunity.

“You’re doing a statue of Marion Barry,” she thought, “and you can’t find a person of color to do it?”

She recalled the outcry when a Chinese artist was picked to create the Martin Luther King Jr. memorial on the National Mall. She thought about the two black artists chosen to paint the official portraits of Barack and Michelle Obama for the National Portrait Gallery. And she considered what it would say to the community, and the world, for the District of Columbia to give such a high-profile commission to a white man.

She was at a meeting of the D.C. Commission on the Arts and Humanities, looking at the final design, when Weitzman approached her. “When this is over, I promise you – I promise you – that you’re going to be very happy,” he told her.

Reluctantly, she took a tour of his Maryland studio. She was impressed by the quality of the art. More notably, she was struck that most of his subjects were African-American.

“When I look around this room and this art, most of it depicts people of color,” she said to Weitzman. “And I’m looking at you and – well, you’re as white as they come. Help me understand this.”

The artist, she remembers, smiled and began to talk. What happened over the next year forced her to rethink her own biases and the complicated questions about the intersection of race, stereotypes and art.

Weitzman, 65, loved to draw from an early age – a skill he probably inherited from his father, a commercial artist who created government posters during the Depression.

His father died when Weitzman was 9 months old, and his mother moved her three sons from New York to Los Angeles. Weitzman grew up in a poor Jewish neighborhood in West L.A., where some of his teachers and many of his classmates were black and Latino – an experience that informs all his art.

After a decade running his own graphic arts company, he turned to an unusual artform: turning dead trees into elaborate carvings, a kind of public art that attracted patrons and publicity. In 1985, he spent two months carving a massive cottonwood trunk at the United Nations to commemorate the organization’s 40th anniversary. Four years later, he carved a 30-foot white oak at the entrance to the National Zoo.

Eventually settling in Maryland, he started a business specializing in beautifying large public projects such as highways and bridges. The business, Creative Design Resolutions, now works on about $500 million in public projects per year and allows him to pursue more personal art through Weitzman Studios.

More than a decade ago, the D.C. arts commission tapped Weitzman to produce a statue of Frederick Douglass, one of two pieces that District officials hoped to place in the U.S. Capitol rotunda alongside statues from the 50 states.

He researched Douglass’ life extensively and portrayed the abolitionist giving his famous speech of July 4, 1852: “The Hypocrisy of American Slavery.” A fierce-looking Douglass stands beside a lectern, clutching the crumpled speech in one hand. His watch chain has thick links to symbolize slave chains, and a quill and inkpot represent his writing.

“One of the hardest things to do with a statue is to give it movement,” Weitzman says. “So I had him standing there about to make this point, a point needed to be made for generations, and he’s pulling his lips back and holding himself back. It’s that moment just before he lets loose.”

Because D.C. is not a state, the statue was initially rejected for the Capitol and spent five years in Judiciary Square. It wasn’t until 2013, after Del. Eleanor Holmes Norton successfully convinced her congressional colleagues to include a D.C. statue, that Douglass was placed in the Capitol Visitor Center’s Emancipation Hall. There was a grand dedication ceremony with Norton, Vice President Joe Biden, House Speaker John A. Boehner and Minority Leader Nancy Pelosi.

None of the speakers, however, mentioned the artist, and Weitzman’s name was not listed in the program.

After Marion Barry died in 2014, Mayor Muriel E. Bowser established the Barry Commission to consider how best to honor the city’s charismatic, controversial “Mayor for Life.”

The commission wanted something that would have “significant visibility for residents as well as tourists” and quickly decided on a lifelike 8-foot statue. In March 2016, the arts commission, tasked with overseeing the $300,000 project, sent out a request to regional artists for proposals. The sculptor would receive up to $50,000 for the work; the rest of the budget was for materials and fabrication.

An 11-member panel of artists and community leaders narrowed the field to three finalists – Weitzman and two black artists – who were asked to create small-scale models.

“It speaks to his sensitivity, his creativity and his artistry – and that’s the gift,” Espinoza says. “I think artistry is colorblind in that way.”

Cora Barry had a seat on both the Barry Commission and the selection panel. But she spent the spring and summer of 2016 in Florida, where she had both knees replaced, and didn’t play an active role in the process until after the panel had settled on Weitzman’s design.

At that point, she expressed her concerns: Marion’s life was about empowerment and equity. Shouldn’t a person of color get this job?

But then she started working with Weitzman.

As he began to sculpt, Weitzman used photographs and videos to capture Barry’s expressions. He asked Cora to bring in Marion’s suits, his cuff links, the snakeskin shoes he loved. The original design included a hat, which she hated, so Weitzman took it off.

Then he asked her and close friends to help with the face. As they talked, he’d tweak the clay model, a process that went on for months. “He was very, very concerned about what I thought of the bust,” she says.

She went back to the studio dozens of times – drawn, she says, by his commitment to get every detail right.

One day last fall, she walked in and knew he was done. “That’s it,” she said.

The finished statue will be unveiled at a dedication ceremony on March 3. It has been kept under wraps, but the final design shows Barry, mid-pivot, waving to the people of the city. As with Douglass, Weitzman wanted to capture Barry in motion, open and interacting.

“I wanted to capture the accessibility,” he says. “This is a man who dedicated his whole life to try to bring up and give opportunities to those who have been traditionally kept down in our society.”

Cora Barry and Weitzman have become fast friends. “I love the art, and I love the artist,” she says. He says he couldn’t have created the statue without her; she says he was the perfect artist for it.

But had she been in Washington during the selection process, Barry says, she would have absolutely fought to give the job to one of the black finalists.

“I did think it was important, but I would have messed up something terrible,” she says. “I think God sent me down to Florida to get my knees fixed so I could get out of my own way.”

For his part, Weitzman says he would have been fine if the competition had been limited to D.C. residents or black artists.

“Of course, I’m cognizant of the fact that I’m not African-American,” he says. “But that’s what humbles me. That’s what’s so flattering – that the committee and all the people associated with this, with all the people who could do this work, could see past this and still decide that I am the person to do this job.”

The entire process, Barry says, was another life lesson.

“Years ago, I heard Minister Louis Farrakhan say, ‘The way to combat racism is through excellence.’ ” she says. That quote has always stuck with her, and now she uses it to describe Weitzman.

“So my take on this: Excellence has no color. There’s just nobody – black, purple or green – who could have done better than what he’s done,” she says.

“The fact that he’s white is so incidental.”